– Apples and a Toaster :

– back at the beginning of the month, several celebrities like Jennifer Lawrence and Kate Upton had their iCloud accounts accessed and nude photos of them were leaked onto Reddit and other sites; detractors and victim shaming trolls say “they shouldn’t be taking nude photos and putting them in the cloud”; not the right response as people can post what they want; this was not a hack, but more of an attack on certain accounts to access photos from their iCloud photo stream, which is not encrypted; passwords might have been easy to guess using a type of brute force method; Apple now adding a bit more security layers; if a service uses 2 step authentication, you should use it; even brute force password cracking methods won’t allow access; that extra layer can help; be careful and protect yourselves, celebs… and everyone, for that matter.
– Link to article: Hack leaks hundreds of nude celebrity photos

– on September 9th, Apple announced new iPhones; the 6 with a 4.7-inch screen and the 6 Plus, which has a much larger 5.5-inch screen; phones became available on September 19th; sold out right away; the 6 Plus was even harder to come by; new camera functions, slightly longer battery life; thinner than previous iPhone 5 and 5s models; Apple Pay, a new service that uses a chip in the iPhone 6 models, allows payments via NFC instead of using a plastic credit card; secure as Apple doesn’t even store transactions or data on their servers; everything handled on the phone locally; Apple Watch announced and shows in demos, but won’t be available until early 2015; prices start at $349; needs an iPhone 5 or newer for most functions; can log steps and activity as well as play music over Bluetooth without needing a iPhone near by; I want one and will most likely be getting one when they ship; not for everyone, at least first version; maybe when version 3 comes out, it will rely a lot less on the iPhone.
– Link to article: Apple iPhone 6, Apple Pay

– silently discontinued after the new iPhones were announced; no more hard drive iPods; this was the last of many in a long line of bigger storage iPods; was hoping for one last model with a 240gb hard drive upgrade; I understand not wanting to hang onto this model anymore, even if I think they should have kept it around; I never upgraded to the iPod classic but my daughter did; she bought a new one once she found out they were discontinued; she gave me her old one; stores sold out of stock quickly; Apple stores removed all existing stock within a day of discontinuing the iPod; also this was the last Apple shipping product to use the 30-pin dock cable and connector; everything currently uses the Lightning connector; RIP iPod Classic.
– Link to article: Apple says a silent goodbye to iPod classic

– mostly people that think I’m the IT Director; as it turns out, there’s several web sites that actually show me as IT Director; glad to know this and that I am severely underpaid and under valued; regardless, I get a good 20 calls a week; I get about the same number of unsolicited emails that I immediately unsubscribe to; it’s frustrating because sometimes calls come in that I am expecting and then I answer it and it’s some sales call that only wants 30 seconds of my time; yeah, whatever; I’ve tried to contact these lists that provide contact details for company executives to have my name removed without much success; actually no success at all; so I just deal with this ongoing issue until I quit then have emails bounce back to them or get delivered to whoever my email gets forwarded to. 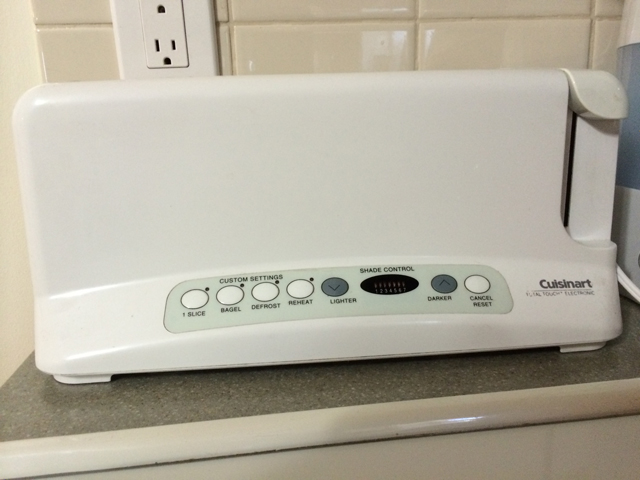 – lasted almost 15 years; one of the first items I bought for my apartment back in 1999; I’ve always liked a good piece of toast, but also want a good quality toaster that isn’t cheap or feels like it doesn’t have enough features without having to watch each item that’s cooking in it like a hawk; pop tarts, bagels, bigger slices of bread – this thing could handle it all; it wasn’t cheap at $100; but for how long it lasted, it was worth it; my wife tried to replace it with another toaster some years ago; that replacement toaster died after a few months; this one got put back into use after that; now looking for another 2 slot long toaster and hoping it will last just as long.