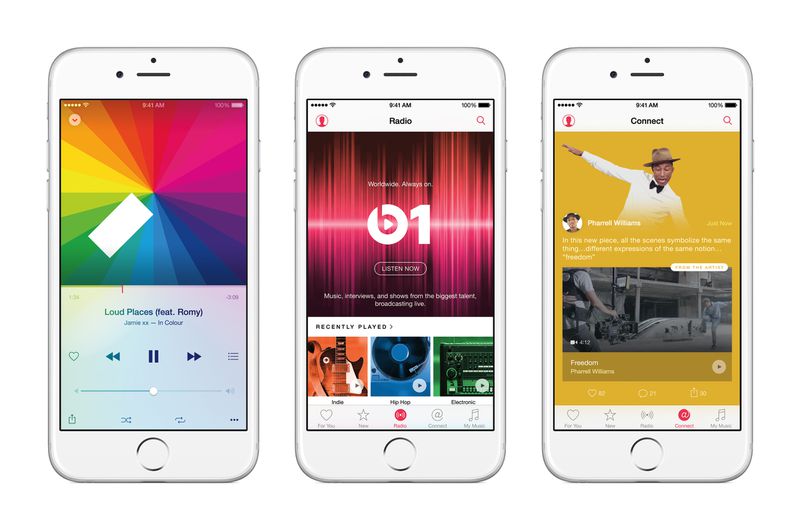 Original image found at The Verge

Yesterday, as part of the WWDC kickoff, Apple announced their new streaming service called Apple Music [using the  character in place of the word ‘Apple’] which has been rumored for some time now.

The service starts June 30th and all users get the first 3 months free before billing starts at $9.99 a month for a single user or $14.99 a month for up to 6 family members, who get their own library and user experience.

Up to 30 millions songs are included for the streaming service, which is not to be confused with “All iTunes songs” [The Beatles and many other artists are not included in Apple Music’s streaming]. Remember, this is a licensing thing, which means all songs on a monthly lease. And yes, I know any piece of music that’s ever been purchased is on a type of license lease, as well. But normally it’s tied to something physical: vinyl, CD, cassette, digital file.

The Apple Music service is a replacement for Beats Music, which will be shutdown once Apple Music goes live and all current users get their data transferred over. There’s a free portion to this new service called Beats One Radio, which replaces iTunes Radio. The difference is that Beats Music Radio is controlled by human DJs, rather than the algorithm generated by your app taps and song plays. We shall see how this all plays out, no pun intended.

And there’s also the part of the new app that shows all locally stored music in M4A and MP3 formats. More on this below.

Apple joins an already crowded streaming genre, lead by Spotify, then Rdio and Pandora following close behind. Then there’s Google Play Music All Access and Amazon Prime, which are both paid streaming, in some form [Amazon’s is tied to the yearly $99 Prime account]. All of these competing streaming sites have free options, where you don’t have total control of the music being played or are limited to using your own uploaded music.

I use Spotify (the $10/month Premium service, which I can downgrade to free if desired) which has quite the selection. I also use Google Play Music, where I’ve uploaded some 3,000 songs so far [out of a limit of 50,000] that stream from their app on my iPhone. I also have the Amazon Music app, but I’ve not opted into the Prime Music. I have several friends that have and they like it, but it’s still a limited set of songs from Amazon’s music catalog.

For those that don’t care to be on the streaming bandwagon, there’s local storage supported in the new app, just like it is now. Any space you have on your phone can be used to store music. As I’ve blogged about before, I still use iPods and have some music on my iPhone and iPad. Yes, it’s a chore to keep them synced at all times, especially when I am not finding current podcasts and recent albums I’ve added to my iTunes library. I know to some this is antiquated, but it’s how I still rock n roll.

The addition of having Spotify is making me spoiled and making these iPods and the methods I go through to keep them updated very old school. Granted, it’s not something I am doing a complete switchover just yet. The main advantage is when a Taylor Swift decided to yank her music from a streaming service, I have the MP3s that I can easily upload and listen to, without worry. Keeps me in control of the music I listen to.

So that’s my thoughts on this. I’m sure I will join up for Apple Music for the free 3 months. I mean, why not, even if you only listen on wifi to save your cellular data plan from draining the bits.

As for Music Monday and the many weeks it’s been gone from this blog, I don’t really have much of an explanation. I’ve missed posting them, but thanks to my many (and ongoing) distractions, it’s another one of those “I love doing this” that gets backburnered more often than I would like it to. I am really trying to make some extra efforts here to get back on blogging track. More on all of this distraction shit in another blog post.