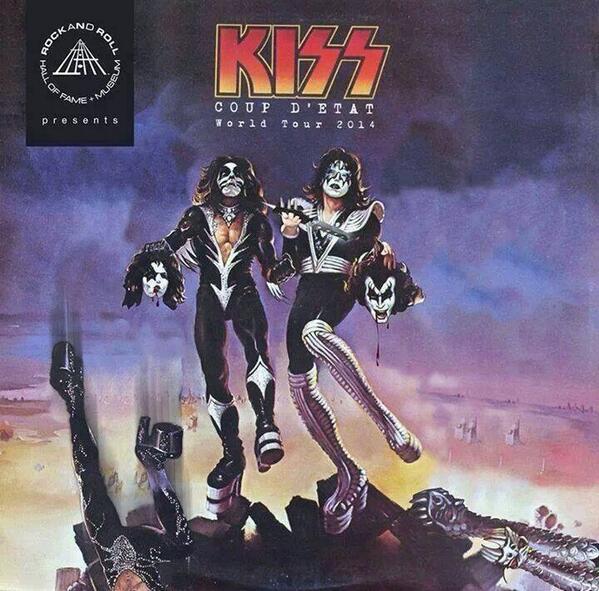 Off with their heads

KISS will not be performing in any lineup configuration at their induction to the Rock and Roll Hall of Fame ceremony next month.

For us long time KISS fans, this has been 15 years in the waiting. And to have it end up with no performance at all, makes me sad. I certainly hope all 4 original members will “KISS and makeup” at the podium for the actual acceptance speech.

The initial announcement came from Ace Frehley on one of Eddie Trunk’s radio shows almost two weeks ago. A day later was a statement from Peter Criss. Then being forced to make an announcement were Gene and Paul on the official KISS website:

To All Our Fans In Regards To The Rock and Roll Hall of Fame:

Out of respect, Ace and Peter’s recent statements demand a quick response to you, our fans.

Our intention was to celebrate the entire history of KISS and give credit to all members including long time present members Tommy Thayer and Eric Singer, and additionally Bruce Kulick and Eric Carr all who have made this band what it is, regardless of the Rock And Roll Hall Of Fame’s point of view.

Although KISS has moved forward far longer without them, Ace and Peter are at the very foundation of what we have built and this would all be impossible had they not been a part of it in the beginning.

It is over 13 years since the original lineup has played together in make-up and we believe the memory of those times would not be enhanced. Contrary to claims made through the media we have never refused to play with Ace and Peter.

We have spent 40 years dedicated to building KISS without quitting or wavering as the band has moved forward with huge tours and platinum albums through different important lineups for forty years, to this day.

This is understandably an emotional situation where there is no way to please everyone.

To bring this to a quick end, we have decided not to play in any line-up and we will focus our attention on celebrating our induction into the Rock And Roll Hall Of Fame.

We are excited and are looking forward to seeing you all on the KISS 40th Anniversary worldwide tour.

Quite the blunt statement, but there it is. No performance from any lineup.

The back and forth statements from the two remaining official KISS members is hard to decipher what their real intentions were regarding the RRHOF. Gene and Paul are a marketing team that owns a band and runs it as a business [as do most bands that have been around a long time] and their vested interests are always selling merchandise and getting their name everywhere they can.

What will happen on April 10th is mostly known. The unknown is what us long time KISS fans hope will happen. And for that brief 5 minute time at the podium, it could end up being the last time we see all 4 original members of KISS together in one place. Let’s hope they make KISStory.