as the title says, not always

Some years ago – many years ago – I used to love to visit Best Buy. In the 90’s, there were no locations here in Utah. So each trip I took to other states, I would actually plan a trip to enjoy a nice big store, a great selection and exceptional customer service.

I fucking miss those days.

Today, Best Buy has drove almost all of their competitors out of business or into deep obscurity, so that in some markets, they remain the only game in town for a large store that carries electronics and accessories.

And while their CD, DVD and Blu-Ray section has shrunken to a tiny amount of shelf space due to the digital media take over, they still have new release Tuesday.

Which was the purpose for my visit yesterday. Eddie Vedder, the lead singer of Pearl Jam, released a new solo album called “Ukulele Songs“. And provided a coupon for this new album to be used in-store at a Best Buy, saving that much more off the price of $12.99. 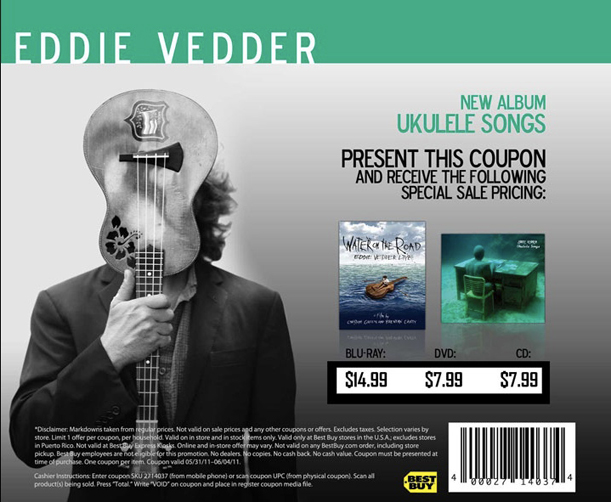 coupon for new CD only at Best Buy stores

So while running errands late in the afternoon, the local Best Buy [Murray, UT] was on the way. I stopped in, went to the minuscule media section and found no discs. Asking the nearest employee if they had extra, he checked and showed they had nothing in stock. 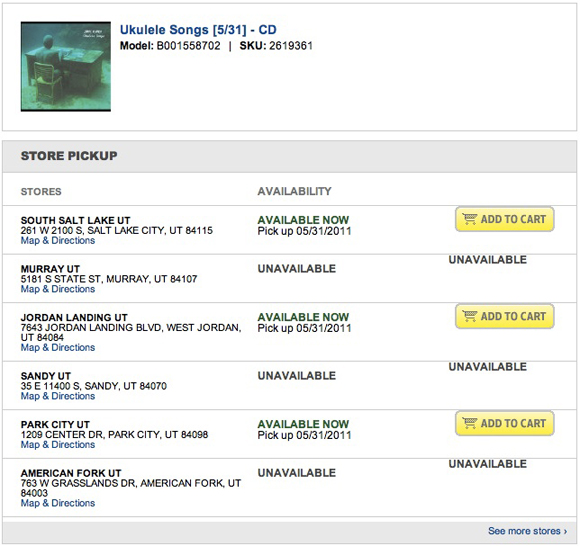 Online shows some stores have it, others don’t

Sure enough, I logged in once I got back to the office and it showed nothing for that store. But it showed other stores still had some in-stock. So later in the day, I ventured off to another Best Buy, found the CD and used my coupon. Somewhat redeemed, plus a nice customer experience at this other location, I eased up on my disgust with Best Buy.

So yes, I understand that most brick and mortar stores are reducing their physical media selections due to the migration towards digital media. Best Buy will even further reduce what they allocate to store shiny optical discs in the coming months. My rant is the lack of stock for a specific promotion on a physical item that is only available in your stores. The fine print on the coupon states that this is an in-store only promotion, not available online.

The idea that on the same day it was released, half of your stores were sold out of the album being promoted is proof you didn’t have that many copies of it to begin with. It’s not like you will have to keep weeks of inventory or have to worry about sending back unsold stock. This is the first week of release, the first day even.

My hope is that future promotions are better prepared for. But given where we are with migrating towards new media and ongoing policies and actions of said big box retailer, I’m not holding out much hope for future store visits.