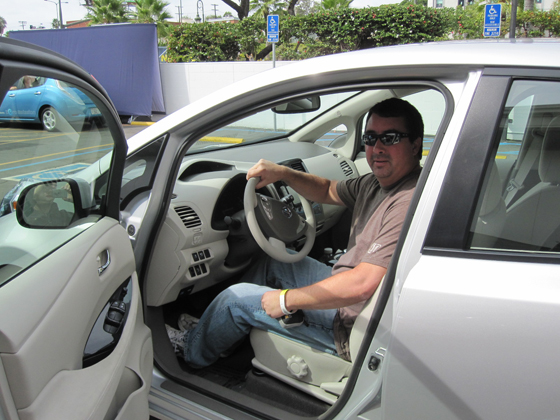 Back on April 20, 2010, I placed my reservation order for a Nissan LEAF – the first 100% electric mass-produced car in the world. Yes, back in the beginning of the automobile, there were more electric cars on the road than gasoline-powered cars. But this is the first by a major car manufacturer and I’m excited to eventually own one. My estimated delivery date is August 2011.

At the end of our California Disneyland trip in October, we drove from Orange County into Century City (near Los Angeles) so I could be one of the first to test drive the LEAF.

Before I go into my excitement of the test drive, let me give you a quick photo tour of the LEAF on display. 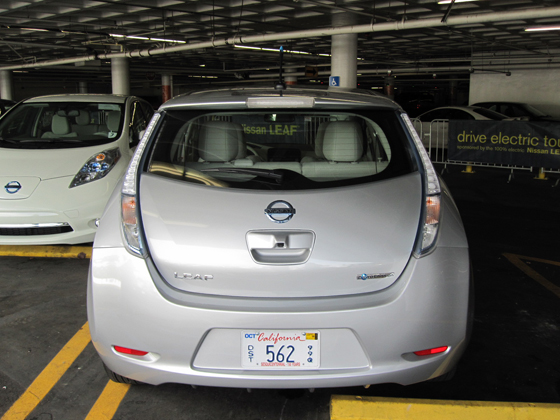 The back of the silver LEAF 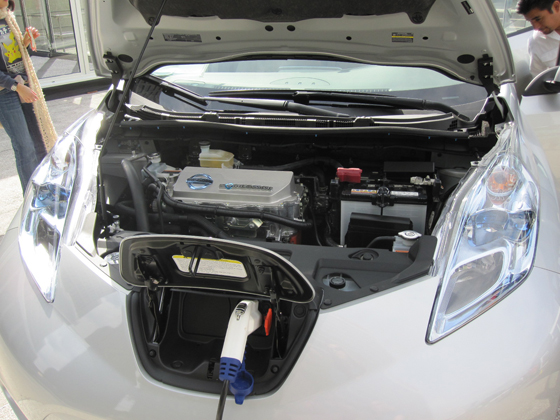 The engine and charging plug 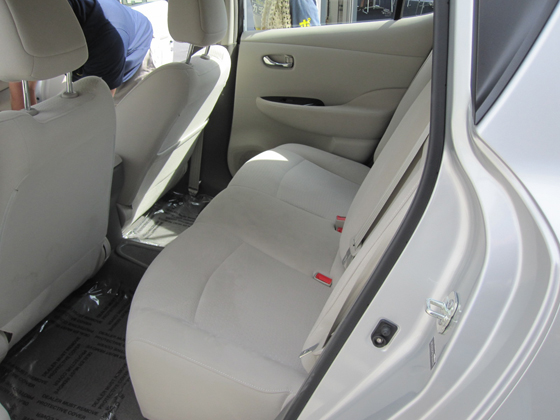 The roomy back seat 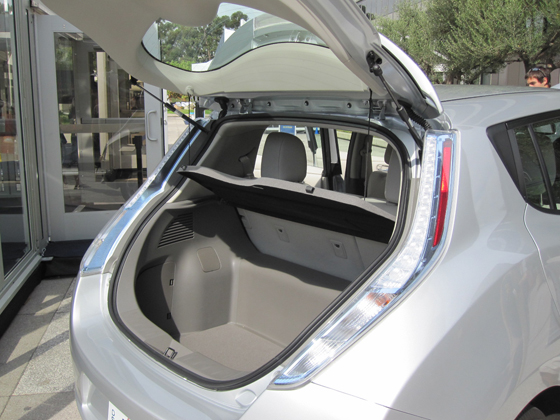 Lots of room in the hatchback 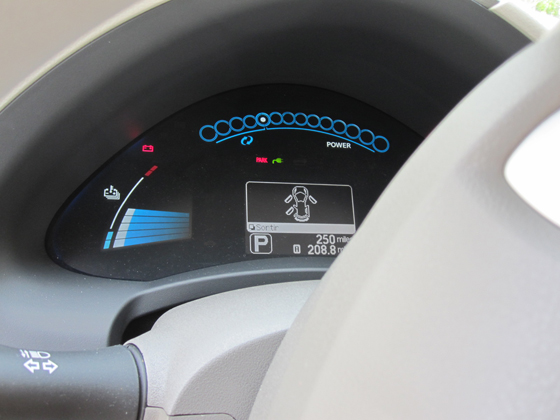 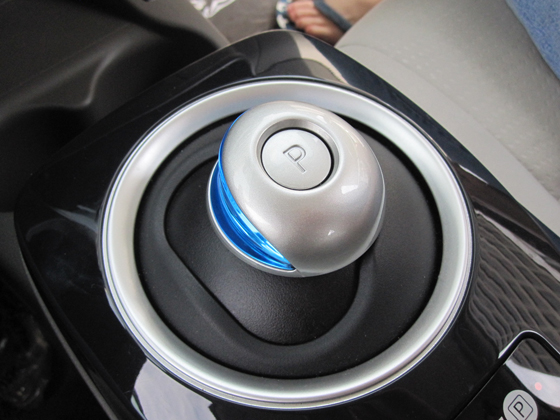 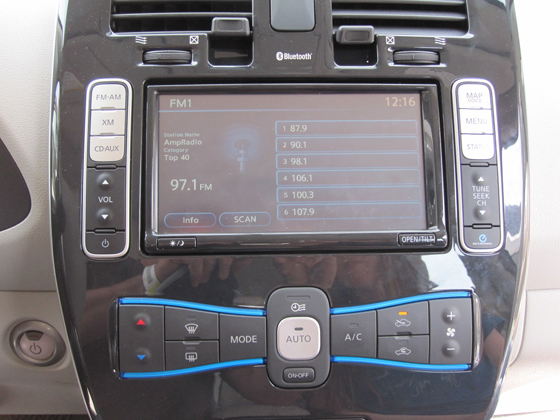 the navigation and radio console

I didn’t get a photo that showed the navigation console, but the above screen – when driving – shows maps, where you are at, all of the GPS coordinates and other details about the car. It’s really quite detailed. 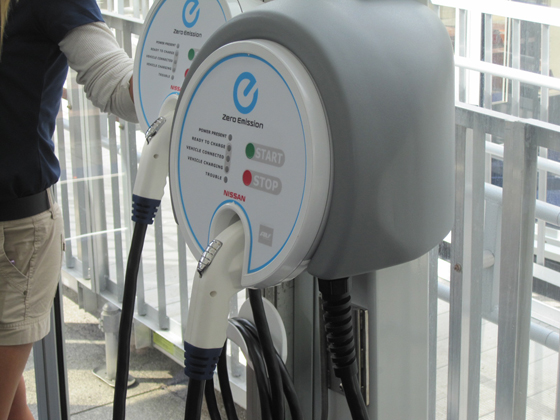 the charging station that gets installed at your home

The above photo shows what one of the charging stations looks like that you install in your garage. It’s about $2200 installed and some states offer to pay for half that cost. A full charge with one of these 220 volt babies takes about 8 hours. The LEAF can go about 100 miles on a charge, which is more than what I drive in three days. You can also charge it with a standard 110 volt outlet, but at double the charge time. 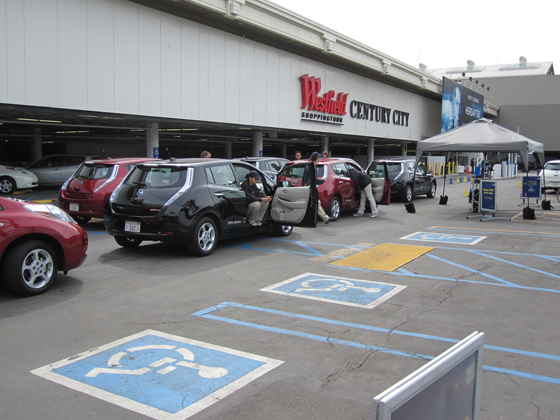 They are waiting for us eager drivers

This is it. My first time driving a LEAF. I was excited to get behind the wheel. We were able to actually take it out on the road [couldn’t video the drive, for obvious reasons]. Basically, it was out on Santa Monica Blvd and circled around the mall and back. The feel of the car was like any other car. Acceleration was quick and powerful. I was able to pass a car and merge into traffic without any hesitation. I felt empowered while driving the LEAF. Turning and handling was exact and no feeling like I was hampered in any way, shape or form. If I was hooked just reading about this car, the drive sealed the deal. 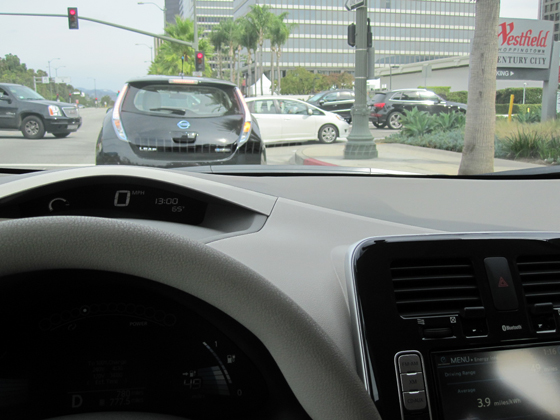 the only photo I took while driving the car

I got a little sad having to bring the car back. I wanted to drive it more and further, but alas the Nissan guy in the passenger seat told me he would have to hurt me if I did that. I tried to explain how Kramer did it in that Seinfeld episode, but he was having none of it, even if he did chuckle a bit. 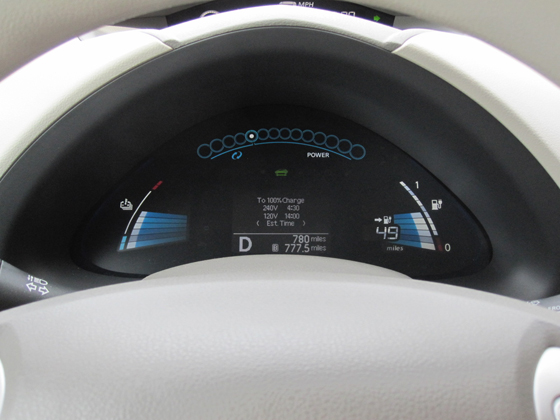 Another view of the charge panel on the dashboard

I Want One Now

How excited am I to get a LEAF now? Very excited. But even though I was one of the first 20,000 on the reserved list, I don’t live in one of the five states that are getting the LEAF first [California, Oregon, Washington, Arizona, Tennessee]. I talked to several people both at the test drive event and online and am told by August of 2011 I should be able to pick up my LEAF. I ordered the silver SL model, which adds the ability to do a quick 30 minute charge, bringing the battery up to 80% capacity.

So what’s all this going to cost? Before any tax breaks or incentive dollars, the LEAF is $33,000. Pretty pricey for a simple car, but it’s so worth it to me. To be on the cutting edge of a new form of transportation. 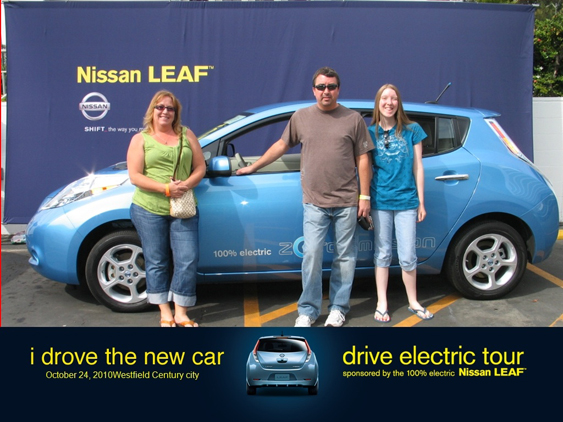 My wife, myself and my daughter – all smiles after a test drive in the LEAF