Ok. This is the first Scooter Sunday where I did NOT ride my scooter…. shockingly true. And I can tell you it won’t be the last time I will have a Scooter Sunday post that doesn’t include a ride on the scooter. But it doesn’t mean there won’t be some scooter talk, as well as other stuff that happened since last week.

The weather was nice enough this last week to ride my scooter to work three out of the five days. It was cold enough in the morning to need my windbreaker, but warm enough to ride home without the coat.

One of my rides home, I was stopped by two people at stop signs, who rolled down their windows in their cars and asked how much I paid for my scooter and how many miles to the gallon I get. The popularity of these two-wheeled vehicles are mostly based on the current price of gas (which is at $3.59 here in Salt Lake). I can’t blame people for wanting to cut back on gas consumption. And with the 100 mpg I get on my 2006 Honda Metro, who wouldn’t want to park the car and liberate themselves from a larger gas hog. Of course, I can’t help but smile since I’ve had mine over a year now, being ahead of the game and leading the popularity pack. 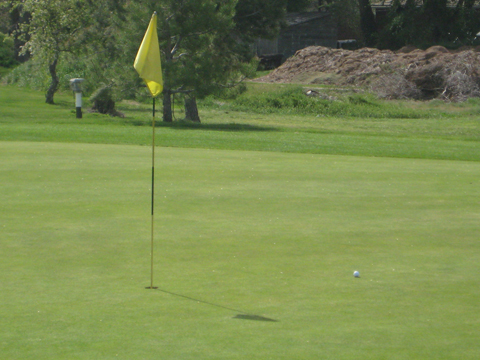 My first bogey of the day

Last week was not only Mother’s Day, but also a weekend without golfing. Now I’m not a fanatic about the game, but I do like to golf. Even the worst game golfing was better than not getting the clubs out. My short game is a lot better than my driving and fairway play. As a right-handed golfer, I have a wicked slice that affects how I drive the ball. I know it’s how my stance is, but because I’ve played so long with my current stance, it’s hard to change without a lot of practice. So for now, I compensate for it by hitting more to the left. This increases my desire to get out more often, so I can work on my driving skills. I really do want to fix this because I know once I do, my game will improve greatly.

A legal victory, but it’s not over yet

Most people know some of my political positions. I share how I feel about various issues and political stances with a good number of my friends and family. For the most part, I have been and continue to be very liberal in my views. One of these views is same-sex marriage. Since this societal issue has been debated, I’ve always been in favor of same-sex marriage. I see nothing wrong with it. Every working adult (and some non-working) that is alive today in this country pays taxes: straight, gay, old, young, poor, wealthy (well, the wealthy seem to find ways to pay less taxes, but they are just as obligated to pay as every other US citizen). And as tax-paying citizens of this country, certain rights and privileges should be afforded to them, based completely on their living in this country and paying taxes. And I feel that marriage is one of these rights.

Of course, there are many that disagree with me on this, mostly based on religious reasons. One the main arguments I hear against same-sex marriage is: God created marriage and it should only be between one man and one woman. I also get told that marriage is ordained of God. And that the bible says homosexuality is a sin. And the list goes on and on and on.

So my first question is this: if marriage is directly tied to religion and God, how can someone that has no belief is God enter into a marriage? Are the couple forced into some church, placed in front of an ordained minister while he proclaims how “God is part of this union” and various other religious statements? Of course not. Atheist couples can marry. And I’ve not heard any outrage from any “believers” trying to pass laws or put to a vote to make it illegal for atheists to marry.

So why the outrage with two men or two women wanting to marry? Why do people feel it’s ok to put to vote any human rights? It wasn’t done in 1954 with Brown v. Board of Education, even though I’m sure there were enough people prejudiced against the black population that would have been willing to vote in favor of keeping segregation. The correct procedure was done, which was a decision by the Supreme Court.

And the correct decision was once again made in California this last week by members of the California Supreme Court. The fight is not over, because there are enough people that don’t see the bigger picture. They see things only from a religious point of view, forgetting that not everyone in this country is religious. They see things only from a prejudiced point of view, because they can’t live with the fact that there are other humans that are different than they are.

There are so many other arguments for and against, and paying taxes is not my only reason for supporting same-sex marriage. But it’s one of the logical reasons to support it. And I hope those that look at this logically will have their voices heard and extend this right to those that deserve it.

Speaking of marriage, my fiance and I have a wedding coming up on June 21st, in Lake Tahoe. And part of the planning involves finding the right outfits, what matches and what will look good. We have decided to get married on the beach of the lake. This involves finding shirts, pants, dresses and shoes that will look good on the sand. So this past weekend, we spent a lot of time looking, buying a few things here and there and getting closer to having everything in place for the big day. It is exciting, even more so for my fiance. I like the casual styles we have picked out, too. It’s something that will be remembered for many years and we want it all to be as close to perfect as we can get.

Until next week (which is Memorial Day weekend and have me back on a scooter), comment as you wish. I think I’ve loaded this post with something to talk about.