Almost two years ago, I switched to a new doctor. This new doctor, unlike the previous general practitioner, wanted to see how healthy I was by giving me a physical. After some blood tests and an ultrasound, it was determined that I had a fatty liver and a small, or “silent” kidney stone.

During our post-test consultation, we discussed the fatty liver and the kidney stone. He asked me how much soda was I drinking, informing me that regular soda consumption can cause kidney stones. Wanting to be honest, I blurted out. “Maybe 4 cans a day,” which was a good per-day average. He continued, “You really need to be drinking less soda and more water and juices.”

Not wanting to give up my love of soda, but also really believing my doctor knew what he was talking about, I decided to try and ween myself off soda [goodbye Dr Pepper… I will miss you, with the exception of those occasional one-night stands].

This flavor is great and having tried some of the others, I really prefer this one. I know it’s got some carbs and calories, but who gives a shit about that… it’s the taste that matters, and more importantly, it’s not soda.

But at a buck a bottle on sale and as much as $1.99 at the corner convenience store, regular consumption can start to get pricey. So I started looking for alternatives.

My fiance’s sister makes a trip to Costco on a regular basis. So I asked her to pick me up some Vitamin Water, specifically the blueberry pomegranate flavor. She returned with a 24-pack of Kirkland VitaRain, and there were more flavors than just my favorite. 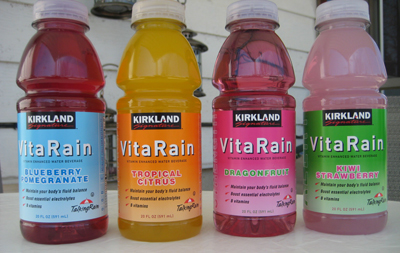 My first instinct was just to give away the other flavors and only keep their version of the blueberry-pomegranate. But I figured, what the hell, I’ll see what the others are like.

And The Winner is….. 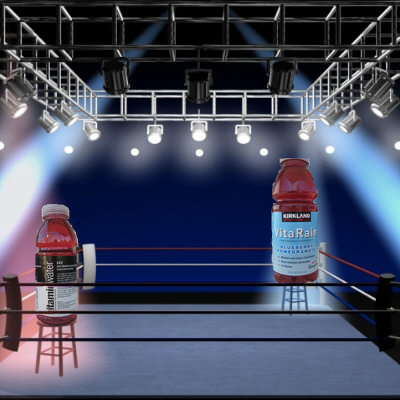 Based on the informal taste test I went through, I found there really was no difference between the two brands. But I’m going to have to stick with the Vitamin Water brand since Costco doesn’t sell a case of just the blueberry pomegranate flavor of VitaRain. Although once they do, I may switch over for the purpose of saving a few pennies.

FWIW, the 5 remaining VitaRain Tropical Citrus bottles are going to be placed inside the community fridge at work, hoping someone will take them. 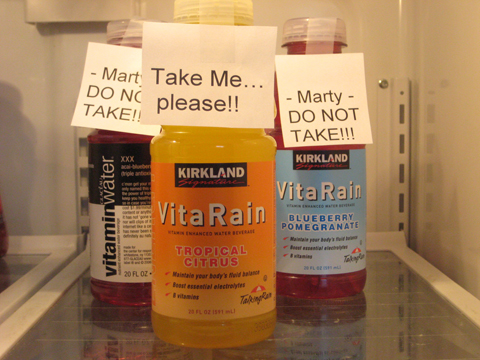