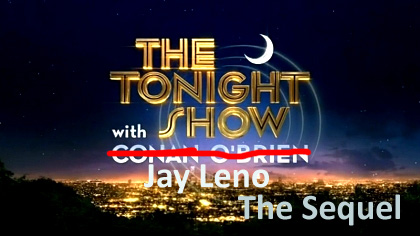 Something happened along the way towards rebuilding a television network, and it wasn’t good.

Some years ago, NBC and Jay Leno had some talks. The talks were about Jay Leno leaving The Tonight Show and [assuming] him retiring from broadcast television. In these talks, they also approached Conan O’Brien and his eventual take over of The Tonight Show.

Fast forward to May of 2009. Jay Leno ends his run on The Tonight Show. The next week, Conan took over from a new studio on the Universal lot. [with the show being previously taped in Burbank]

In September, NBC gave Leno a new show. They called it The Jay Leno Show. An hour long experimental variety show. It sounded good. And there were even a few moments of comedy gold. But obviously not good enough for the network affiliates. NBC announced they were taking the show off the air of as February 12, 2010.

But wait. Somehow, this show will reappear in a thirty-minute format airing in the 11:35pm ET/PT – 10:30pm CT/MT time slot. That doesn’t sound like being canceled. NBC is calling it “rescheduled.” Ok then.

Not so fast, NBC execs. Let’s hear what Conan has to say:

In the last few days, I’ve been getting a lot of sympathy calls, and I want to start by making it clear that no one should waste a second feeling sorry for me. For 17 years, I’ve been getting paid to do what I love most and, in a world with real problems, I’ve been absurdly lucky. That said, I’ve been suddenly put in a very public predicament and my bosses are demanding an immediate decision.

Six years ago, I signed a contract with NBC to take over The Tonight Show in June of 2009. Like a lot of us, I grew up watching Johnny Carson every night and the chance to one day sit in that chair has meant everything to me. I worked long and hard to get that opportunity, passed up far more lucrative offers, and since 2004 I have spent literally hundreds of hours thinking of ways to extend the franchise long into the future. It was my mistaken belief that, like my predecessor, I would have the benefit of some time and, just as important, some degree of ratings support from the prime-time schedule. Building a lasting audience at 11:30 is impossible without both.

But sadly, we were never given that chance. After only seven months, with my Tonight Show in its infancy, NBC has decided to react to their terrible difficulties in prime-time by making a change in their long-established late night schedule.

Last Thursday, NBC executives told me they intended to move the Tonight Show to 12:05 to accommodate the Jay Leno Show at 11:35. For 60 years the Tonight Show has aired immediately following the late local news. I sincerely believe that delaying the Tonight Show into the next day to accommodate another comedy program will seriously damage what I consider to be the greatest franchise in the history of broadcasting. The Tonight Show at 12:05 simply isn’t the Tonight Show. Also, if I accept this move I will be knocking the Late Night show, which I inherited from David Letterman and passed on to Jimmy Fallon, out of its long-held time slot. That would hurt the other NBC franchise that I love, and it would be unfair to Jimmy.

So it has come to this: I cannot express in words how much I enjoy hosting this program and what an enormous personal disappointment it is for me to consider losing it. My staff and I have worked unbelievably hard and we are very proud of our contribution to the legacy of The Tonight Show. But I cannot participate in what I honestly believe is its destruction. Some people will make the argument that with DVRs and the Internet a time slot doesn’t matter. But with the Tonight Show, I believe nothing could matter more.

There has been speculation about my going to another network but, to set the record straight, I currently have no other offer and honestly have no idea what happens next. My hope is that NBC and I can resolve this quickly so that my staff, crew, and I can do a show we can be proud of, for a company that values our work.

Have a great day and, for the record, I am truly sorry about my hair; it’s always been that way.

Taken from the following NYTimes story

Let me say that I agree with Conan and applaud his decision. Conan is at the top of his game. His move from late night to the spotlight at night was mixed. He’s not always the funniest guy on at night. But he tries. And he gives it his best effort. And that’s what I like about him. He’s fresh for someone that’s been on the air for years. His writing experience helps a lot. As does his quirky wit and sense of humor.

And Conan also makes a very good point about respecting the institution that is The Tonight Show. Sure, it’s got it’s stale moments here and there, but to move it just to accommodate it’s previous host smacks of disrespect and shortsighted decision making. Plus, it’s not just Conan that would be getting bumped. Jimmy Fallon and Carson Daly would get pushed later into the wee hours of the morning.

And speaking of the previous host, NBC will continue to do it’s best to do whatever Leno wants to do. They stood by him even though most people knew the best option for everyone was for Leno to retire. He had his first chance in May. Now he’s blowing a second chance. I know there’s some pressure from the execs, but all Leno needs to do now is step aside and let Conan take the reins. Jay has had his day in the spotlight. Let him fade into the sunset in one of his collectible cars.

I know this is sounding like a “hate on Leno” post. I really don’t hate Jay Leno. In his day, he was funny. I saw him live in 1992 at Caesar’s Palace. He was very topical and I laughed hard. I’ve even met Leno in person. A really nice guy. But sometimes with age, you get into a rut or groove. You set the cruise control to coast and let it ride. Don’t look back. Otherwise, you might see what you should have done. 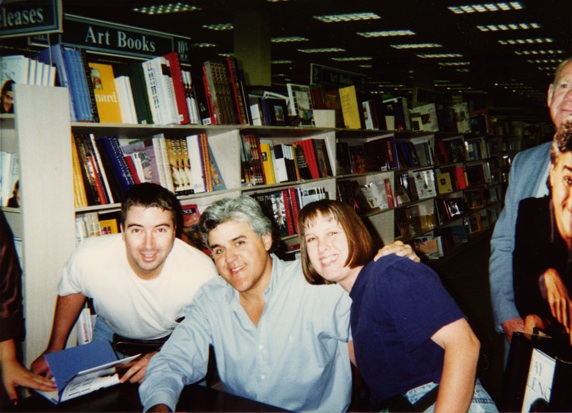 Adding to all of this, NBC’s recent fucked-up decision to allow a cable network to have controlling interest. That’s an entire blog post in of itself.

Nope, this is not going to turn out good here, folks. Move along, nothing to see here. Change the channel. And with any luck, it will land on the station that Conan will be on.