Tag: The High End of Low

This last weekend, I decided to finally upgrade this blog from WordPress 2.6.5 to WordPress 2.8. I normally will wait on new versions of WordPress for a long time before upgrading, hence still being on an older release.

Most of the move was smooth and caused very few problems, namely the SEO plugin and some formatting with the display of comments [it was showing each comment twice: both 2.8 compatible comments and legacy comments].

But, I also noticed something else. The most recent Scooter Sunday video was taking forever and a day to load up in the background. What normally would take less than 20 seconds is now taking at least three minutes or longer to load up.

For anyone that’s been experiencing problems trying to watch the videos, this is resulting in the video stopping while it’s playing, which means you need to click play to start it again, which can sometimes restart the video from the beginning. Frustrating, I know. 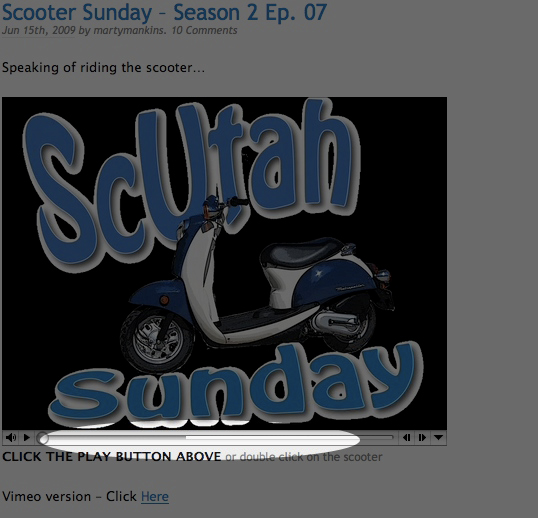 the highlighted area above is the progress bar, showing the video downloading

In order for the video to play smoothly from start to finish, the video needs to download itself completely. From most broadband connections, this should take under 30 seconds. To tell when the video is loaded all the way, the above picture shows the highlighted progress bar. When it’s all “filled in”, it’s ready to be played. Alternatively, you can also start playing the video right away and it should load up and play at the same time, with no need to make sure it’s loaded all the way first.

When I brought up this slowness issue to my ISP, 1and1, the support staff informed me that steaming video was not allowed and that 30mb videos were “too much traffic that infringes on the other users that are hosted on the same server.”

Um, excuse me, but my monthly hosting plan allows for up to 1.2Tb of transfer. Last month, I only used 2% of that. Logically, I could use another 98% of that and still not go over my monthly allotment. I have Scooter Sunday fans that need their videos – unedited and containing the music that goes with each episode. For now, I’ve resolved the issue by moving the videos to another server I have [coincidentally with the same ISP] and they are back to the speedy loading videos they were before.

But if for some reason, if any of you experience slow down again [or any other issues], shoot me an email via the Contact form. 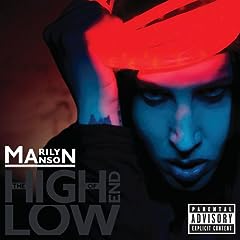 I make no apologies for being a big fan of Marilyn Manson, the band, even if the artist known as Marilyn Manson can be a mixed bag at times. But musically, I think the former Brian Warner and his collective pool of dual-named participants have made some incredible and impacting music starting in the mid 90’s and continuing into the new decade. And while I have my favorite albums – “Antichrist Superstar” “Holy Wood” and “Mechanical Animals” – I also like the band’s newer albums. But even after many listens, these new albums still don’t grab me completely. Such is the case with “The High End of Low“.

Songs that are finding their way into my favorites list are “Pretty As a ($)”, “Leave A Scar” “Running To The Edge of the World” and “Blank and White” Both musically and lyrically, these songs are catchy and have a lasting connection with what I’ve grown to like in the construction of Marilyn Manson songs.

Then there’s songs like “We’re From America” which is very clever with lines like “We don’t believe in credibility/Because we’re know that we’re fucking incredible” but with a musical tone that tends to wear out it’s welcome after a few listens. Waiting a while and going back to re-listen to the song produces a new appreciation followed by a need to give it another rest.

As for what doesn’t grab me, it’s lines like “I wanna fuck you like a foreign film/and there’s no subtitles to get you through this” from the song “I Want To Kill You Like They Do In the Movies” It’s not only cheesy, but very much over the top. I get the idea of the story here, but for me, it’s reaching in the art of songwriting, even for Manson. Same with the song “WOW” which falls apart early on, both in word and in tune. Bringing it back to the hard edge, “Wight Spider” works out the creativity by proclaiming “I’ll possess you but I don’t need you to be another one of my possessions“

I’ve played the album from start to finish at least ten times since it’s release and it’s certainly not horrible or unlistenable. It’s got a more polished finish than “Eat Me, Drink Me” has, but less of a shine than “The Golden Age Of Grotesque” played to the Manson fan more consistently. I still always go back to the song “(s)AINT” at least once a week. Hard to resist that leading-up-to-the-chorus line “I’ve got an F and a C and I’ve got a K, too/and the only thing that’s missing is a bitch like you“

So if you are already a big fan of Marilyn Manson, this album will eventually work it’s way into your playlists. And while it’s no “Antichrist Superstar”, it’s a good effort that’s worthy of welcoming Twiggy Ramirez back to the fold.