– the higher court refused to hear appeals cases from the 5 states, so effectively, they were denied; Once the 10th circuit court issued their order, states were free to start issuing marriage licenses; So now same-sex marriage is legal in 30 states; for those of you keeping score, that’s over half the nation; Here are the states added this week: Indiana, Oklahoma, Utah, Virginia, and Wisconsin; the additional 6 states are: Colorado, Kansas, North Carolina, South Carolina, West Virginia and Wyoming; and given other appeals courts decisions, there will be 5 others states; since Monday, Nevada also has lifted their ban; for now, due to a last minute state request, marriage equality is still not legal in Idaho; the ball started rolling last December when Utah went legal for 17 days; Those who are still fighting against this need to just stop; it changes nothing for anyone currently married; nothing will happen to your marriage, unless you want it to and cause it on your own terms; religions still are not forced to perform same-sex weddings; this has happened before with interracial marriage; it too, was banned for years, but made legal due to a Supreme Court decision; equality always wins in the end.
– Link to article: Supreme Court Delivers Tacit Win to Gay Marriage

– it’s obvious that Crowe and Cusack haven’t given their approval on this; both of them tweeted their distaste for this NBC TV series; 20th Century Fox owns the cinematic property, but it’s pretty common to get the director’s approval when a movie is made into a TV series; my take is to leave the movie alone; don’t bastardize it by taking it to the smaller screen; the movie was perfect on it’s own; no need to extend the story; I am with Crowe and Cusack on this and I hope their opposition will echo to those who are writing the script and green lighting this project.
– Link to article: Cameron Crowe, John Cusack Slam ‘Say Anything…’ TV Series

– oh no, I don’t think we need another Bush in the White House; now for those of you listeners that are Bush fans, you might want to fast forward through this part; I was no fan of Jeb’s brother for the 8 years he was in office; their father was better, comparably, for the 4 years he was president; Jeb was governor of the state of Florida for 8 years and from those that I know that lived there, he was a mixed bag; granted, most politicians are at some point during their terms; just don’t need to extend the Bush legacy; I mean, what chance do we want to take on a 3rd Bush trying to control this country; don’t need it and don’t want it.
– Link to article: Rich GOP – Why are they so eager to give Jeb Bush their money? 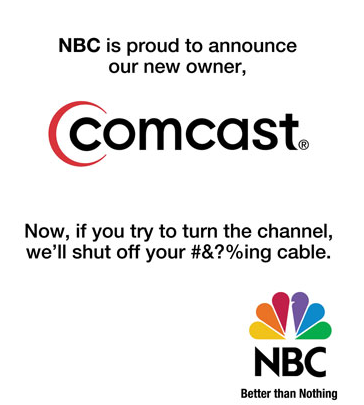 – We have Comcast for our TV; back a couple years ago, they did away with all analog signal broadcasts; this means you need a cable box to watch TV, turning your HDTV into a fancy screen set to Channel 3; no more built in tuner support if you have cable; if you want to use your built in tuner, you need an HD antenna; the signal you get from that is in the clear HD for your local channels; the included cable box is an SD, meaning it doesn’t broadcast HD; if you want cable HD, you need to pay $10 a month – DVR extra; this means that the cable company is taking an HD signal, shoving it through the wire, into this SD box and displaying a crap picture on your HDTV; unacceptable, but somehow, they are getting away with it; so tempted to ditch cable for local channels and get an antenna; or go with DirecTV; but the cost is another rant for another episode.

– hard to believe it’s been 3 years since Steve passed away; all too young; a visionary for the many things he’s brought to us Apple fans; I recall hearing the news as it was a day after an Apple event; so sad, but his legacy lives on in the devices we use today; RIP Steve.