It has happened again.

YouTube has censored another one of my videos. Nope, not another Scooter or Snowy Sunday video. This time is was concert footage from a show I went to this year.

Back in September, I went to see The Psychedelic Furs live here in Salt Lake at a small club. Even got to meet them afterwards, which was nice. And as I normally do, I had my digital camera with me and took some photos and a short video clip.

I’ve posted clips of concert footage before from other shows and have never had any warnings or notices until now. Here’s the first notice I got in my email: 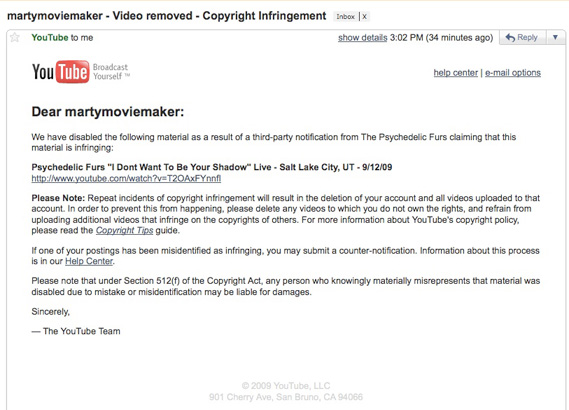 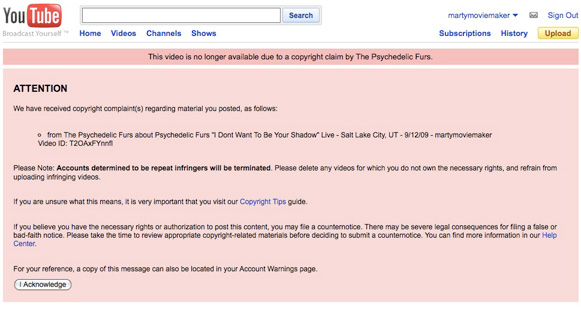 Here’s the offending footage that YouTube removed (which I uploaded to Vimeo, hoping they won’t yank it):

Obviously, I’m a bit concerned as I don’t want to be have my YouTube account disabled or removed. So I decided to do a bit of research to see if there were other videos by Psychedelic Furs that were removed. Imagine my surprise to find another video of concert footage uploaded from the October NYC show, which still remains online.

What The Fuck? Why is mine taken down while this video gets to stay? Is it that the quality is better? Surely it can’t be that the video is too short, as this footage is most of the song. Mine was just a couple of minutes of the song.

And I found another one from the Philadelphia show two days before the NYC show:

Quality wise, this guys video is so-so, but yet it’s not the video that YouTube is taking issue with. It’s the music. And I really think this is coming from RIAA or the bands record label, not directly from the band, as the notice states.

I was under the impression that the copyright issue didn’t apply to concert footage that you personally shoot on your own camera. But according to YouTube’s video upload page, they now include “music concerts” as content to avoid uploading. Yet, my concert footage clips from Pearl Jam, Green Day and Depeche Mode remain on my page, with no issues or warnings.

Which is why I am further confused about what gets to stay and what gets removed on YouTube.

And which is why I will make even more efforts to further reduce what I upload to YouTube.