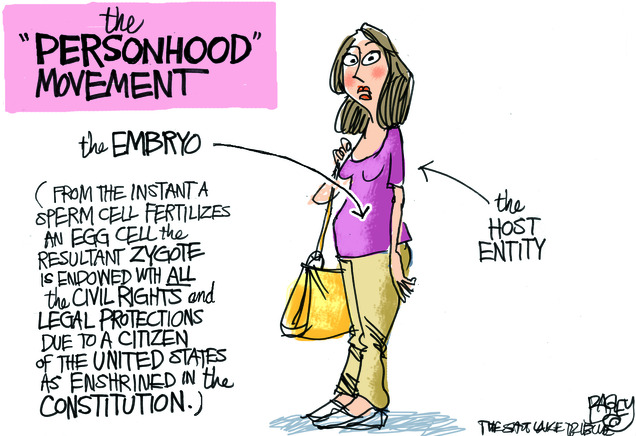 Just like Colorado in 2008 and 2010, we can now add Mississippi to the short list of states that are attempting a very radical form of making abortion illegal. It’s called Personhood. And just like in Colorado, this measure was defeated in Mississippi during this recent general election.

It basically takes the rule of giving a fertilized egg of a woman legal rights, in case it’s existence is eliminated in some type of aborted process. The main focus is abortion, but it also happens to include an actions that include some types of birth control and miscarriage, which in many cases, is out of the woman’s control. Yes, those who are in support of such a measure say legal challenges to birth control and miscarriages will never happen. And they do make mention to exclude a condom as an accessible form of birth control. [shockingly surprised] But the vagueness of how the measure is written is very broad and not really specific in terms of what exactly gets enforced. The very idea of birth control like The Pill, prevents a fertilized egg from attaching itself to the uterus wall. It’s a similar process for someone who uses an IUD.

Color me confused. I thought the move of the ultra conservative movement was to reduce and limit government in our lives, not increase it. What’s next.. giving this zygote a Social Security Number? I’m not trying to make this into a slippery slope, but the very idea of giving rights to an egg opens up an inalienable list of protections and rights that normally are afforded to a birthed human being.

Regardless, for now, we can breath a sigh of relief. At least until the next time this Personhood movement rears it’s ugly head in another state. Until then, follow the links below to educate yourself on the consequences of this movement.

No on 26: Mississippi “Personhood” measure would outlaw most birth control
Panel Recommends Free Birth Control; Anti-Abortion Groups Flip Out
Mississippi ‘Personhood’ Law Could Cause Legal Mayhem, Experts Warn
Then They Came for Your Birth Control
The next front in the abortion wars: Birth control