Every few nights, we have a visitor at our house…. 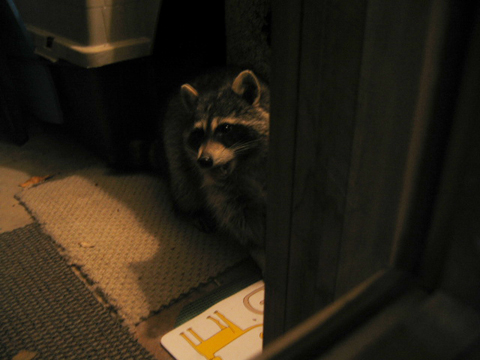 And this creature cleans up any remaining food, making a mess for me to find in the morning when I go out to feed the cats. 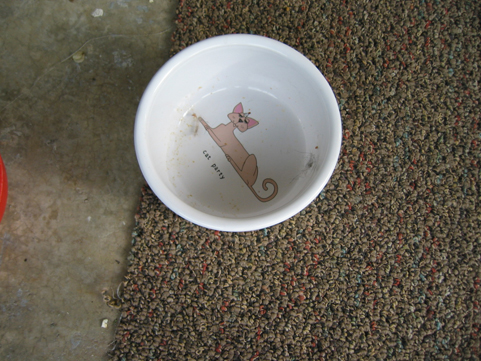 Ready for me to wash out before feeding the cats

Each spring, Mr. Raccoon always shows up right when the all of the snow has melted and the weather is starting to warm up a bit. We think he lives in the canal behind our home, since there are many ducks, rodents and a fox that live in that mostly marshy area.

Our main concern isn’t so much that it’s coming up and stealing cat food. It’s that possible confrontation with one of the cats. Since a raccoon is an untamed wild animal, it may fight back if it finds one of the cats to be a threat. So far, only one of the cats [the oldest, and the one staring into the camera in the photo below] has snapped at the creature on one visit. 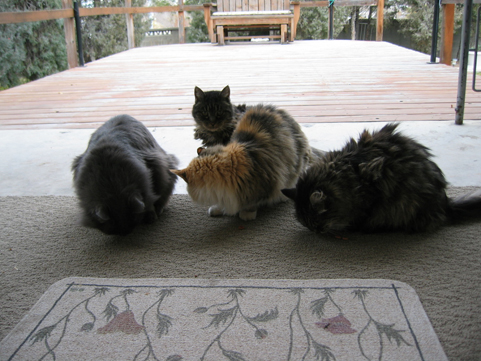 Our defense to keeping the raccoon away is to bring in the food at night… if we remember to do so. Sometimes we don’t, and that’s when the unwanted beast enjoys a free meal and watering.

But the raccoon’s biggest concern isn’t the cats. It’s traffic. We live right on a busy road and when the raccoon finds no food at our place, he tries another home. Unfortunately for him, that means either swimming in the canal or crossing the road. 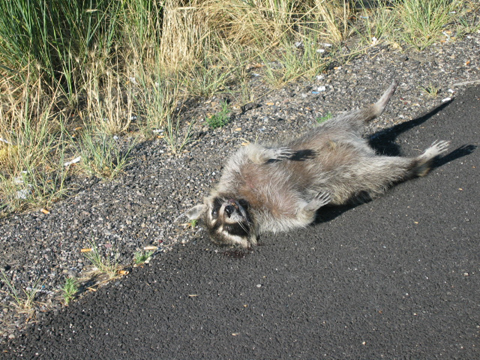 So far, we have only found one dead on the road. And I really do hope they find their fate a more natural way. Getting hit by a car isn’t the most pleasant way to kick the bucket, even for a creature stuck in the city.

We have thought about various ways to get the raccoons back into their wildlife home. But if they are born here in the city, their instincts are not wildlife-driven. They are based on survival in the city. That rules out catching him and driving him up to the mountains. We contacted the local Humane Society and Animal Control offices, asking what we can do. Their two options were actually less humane then excepted: drowning after being trapped in a cage or placed in a large garbage bag while being euthanized from tailpipe exhaust. WTF?

Given those options, we have chosen to bring the food in each night and hope that it goes elsewhere to find food. For those nights we forget, it’s gets a meal and goes home after eating, leaving the felines as they are.