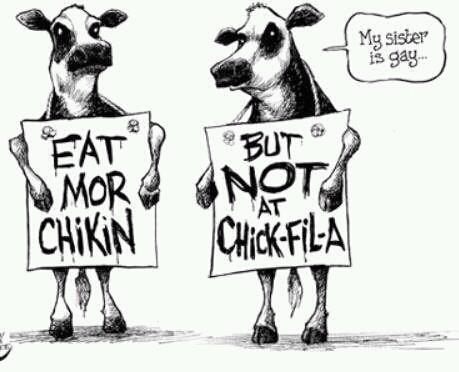 Just not at Chick-fil-A

It’s been quite the two weeks of controversy for the fast food retailer Chick-fil-A. CEO Dan Cathy found himself in an interview and offered his distaste for marriage equality and the fire storm has been cooked up like a batch of breaded chicken breasts consumed by the minions. Ultra religious former governor Mike Huckabee decided to rally the majority with an Appreciation Day this past Wednesday and give the chicken chain a giant pool of revenue, with long lines and open wallets. Obviously the economy that the conservatives complain that’s still in the shitter wasn’t a problem for this one day.

All of this is to defend traditional or biblical marriage, which in this liberal’s opinion has changed enough in the past without the fight to include same-sex partners. But the official company statement says they are not interested in getting into the political discussion, yet somehow they have.

Our mission is to create raving fans; we plan to leave the policy debate over same-sex marriage to the political arena. http://t.co/eab3IDXa

And I really hope they do try to leave it alone, maybe taking extra steps to tell Mr. Cathy to tone down his “biblical mantra for all” commentary – unless of course they want another religious supporter to garner support for another Appreciation Day to boost their poultry profits.

Even mayors of Chicago and Boston have joined in the discussion with their wishes to not have a homophobic retailer doing business in their city. While I think that’s going too far [and offering unnecessary and additional press and promotion for Chick-fil-A], it’s certainly sparked an interest for discussion on support for marriage equality. 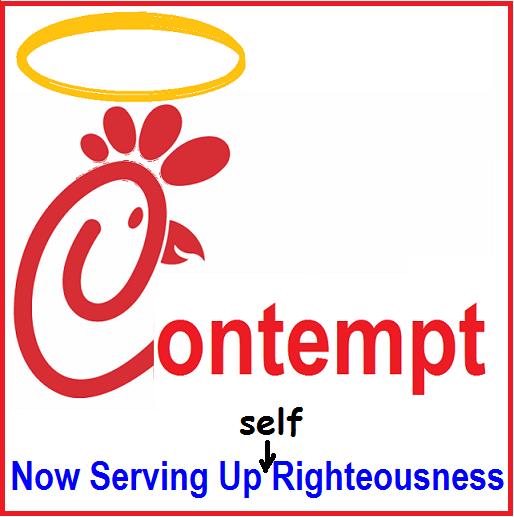 My thoughts on this whole brew-haha? I was never a customer of Chick-fil-A before because I am not fond of fast food chicken, don’t like a company donating money to organizations that work towards removing rights and privileges to a select group of people, and abhor the discriminatory hiring practices they use that have affected certain individuals employment options at their stores. So there was no reason to join in the boycott or stop patronizing because of Mr. Cathy’s comments. I’m simply not a customer.

I see this more as another victory for the majority (self-absorbed Christians) and a defeat for the minority (the LGBT population of tax-paying citizens). For some reason, the majority is all worried about their dominance in this country, by handpicking parts of a 2,000+ year old book with outdated reasons to disparage various groups of people. It boils down to one thing: they really don’t like anyone different than them. That’s my opinion and I know not every God-fearing person is like this. And thank God they are not. I know of many religious organizations, individuals and groups that fully support marriage equality and I applaud that every chance I get.

But those who fight against marriage equality are not respected by myself and neither are businesses that donate millions of dollars to fight against something that has nothing to do with their religion, their personal lives nor their community. There are committed couples in this country that deserve the same privilege of legal civil marriage that all heterosexual couples automatically enjoy. Eventually, we’ll look back and wonder why it took so long for this to happen. But until that day comes, we continue to be divided by belief, prejudice and fast food chicken.