It was just last year, Apple made changes to it’s iCloud storage plans, increasing the storage space you get and for either the same amount of money or less.

Around this same time last year, I blogged about my iCloud storage situation, which ended up going from $40 a year for 25gb to being $12 a year for 25gb. Such a deal. And I didn’t have to do anything. The pricing changes just happened.

The storage plan before the latest upgrades

I lived with that 25gb for the last year, which renewed in July. So when the new changes to iCloud paid storage happened just a few weeks ago, I thought that it would automatically upgrade me to the 50gb plan for the same $11.99 a year. Turns out that wasn’t the case. Apple got rid of all annual storage plans, going to all monthly plans. In order to the get the additional space, I need to cancel my old plan for $11.99 a year and sign up on the new one at $.99 a month. It took a phone call to Apple support to get this worked out, since their official page doesn’t mention anything about how I can keep my annual plan – grandfathered – yet not get the additional storage. So doing the simple math, that’s 25gb for $11.99 a year or at $.99 a month, that’s $11.88 a year. Yeah, I wanted twice the space for a tad bit less. The support agent was able to take care of getting me a full refund on my $11.99 yearly plan. Then I signed up for the 50gb plan at $.99 a month while still on the phone call. 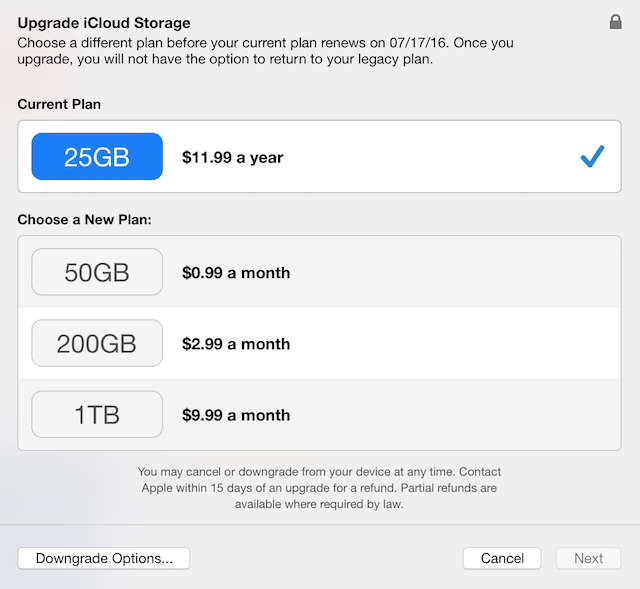 The current annual plan and the new monthly plans 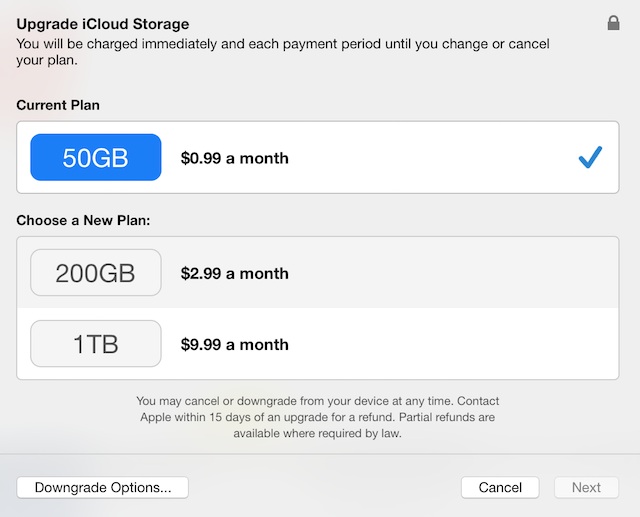 So now that I am all taken care of and my billing is now monthly, I am enjoying twice as much space as I had before for pretty much the same price. The additional storage is nice as I can now take advantage of storing more photos in the cloud, more emails and larger backups from my iPhone and iPad.

Anyone else go through a similar issue with their iCloud storage? How did you resolve it? Or are you happy with the free 5gb you get?